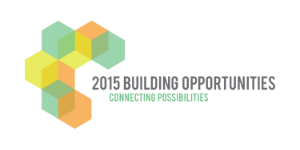 In June I had the privilege of serving on and moderating a panel at the 2015 Building Opportunities conference in Vancouver, a fantastic event that brought together of hundreds of activists from all sectors of society who share a commitment to the evolving field of “social purpose real estate”.  Our panel, on mission-driven business models for multi-tenant centers, included presenters from Vancouver, Calgary, Midland, Texas and Boston who engaged a packed room of participants in a lively conversation about how aligning a project’s mission with its business model can produce a wide variety of innovative results. It’s an exciting time to be working in this field!

The Hive in Vancouver, the city’s “sweetest social impact community”, is a 9,000 sq. ft. space in a thriving section of downtown, home base for over 100 groups – nonprofits and for-profits alike – as well as about 200 individuals. Members can opt for a permanent desk, hot desk, a virtual office, or simply join as a member of the community, all for a monthly fee.  Midland Shared Spaces, about halfway between Dallas and El Paso, is a 43,000 sq. ft. Class A building in the central business district with 16 nonprofit tenants on multi-year leases. MSS has a philanthropic mission and offers below-market rents and substantial amenities to its tenants, whose leases include a provision around collaboration.

cSPACE in Calgary, a self-described social enterprise for communities of artists, nonprofits and entrepreneurs, is explicit about its intention to be a place for “cross-disciplinary and cross-sector collaboration and networking”.  By creatively assembling funding from a mix of public and private sources, cSPACE was able to acquire a 42,000 sq. ft. building on a 3-acre former school site which had been vacant for 12 years. About half the space is rented by nonprofits at substantially below market rates, another 30% is devoted to performance and event space and the rest is for co-work space and meeting rooms.

Third Sector New England’s NonProfit Center, “Boston’s home for progressive social change”, which opened in 2004, is an eight-story, 110,000 sq. ft. building in the city’s Leather District, abutting the financial district and Chinatown and at the edge of the new Greenway. About half of the NPC’s 43 tenants are in conventional office suites with multi-year leases that are 20% below market rate; the other half are in shared-space suites with one-year renewable license agreements. In its 11 years of operation, the NPC has experienced minimal tenant turnover. Like the other centers described here, the NPC is clear about its mission: to provide stable, affordable rent, foster collaboration and raise the visibility of Boston’s social change sector.

Although the four centers represented on the panel differ in their physical spaces and business models, they share clarity around their social purpose missions and an understanding that in the 21st century, collaboration is not just a feel-good buzzword, but a necessity for sustainable success. It was a pleasure to get to know my fellow panelists Jeremy Murphy (the Hive), Vicki Jay (MSS) and Reid Henry (cSPACE).

Jonathan Spack is Chief Executive Officer of Third Sector New England, a Boston-based capacity builder. He is a founding board member of the Nonprofit Centers Network and currently serves on the NCN Steering Committee.

Jonathan Spack is Chief Executive Officer of Third Sector New England, a Boston-based capacity builder. He is a founding board member of the Nonprofit Centers Network and currently serves on the NCN Steering Committee.

nextExploring the Colocation Option with The Nonprofit Exchange